The GIPC1-Akt1 pathway is required for the specification of the eye field in mouse embryonic stem cells. 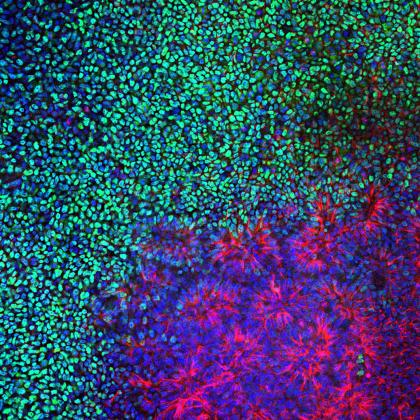 During early patterning of the neural plate, a single region of the embryonic forebrain, the eye field, becomes competent for eye development. The hallmark of eye field specification is the expression of the eye field transcription factors (EFTFs). Experiments in fish, amphibians, birds and mammals have demonstrated largely conserved roles for the EFTFs. Although some of the key signaling events that direct the synchronized expression of these factors to the eye field have been elucidated in fish and frogs, it has been more difficult to study these mechanisms in mammalian embryos. In this study, we have used two different methods for directed differentiation of mouse embryonic stem cells (mESCs) to generate eye field cells and retina in vitro to test for a role of the PDZ domain-containing protein GIPC1 in the specification of the mammalian eye primordia. We find that the overexpression of a dominant-negative form of GIPC1 (dnGIPC1), as well as the downregulation of endogenous GIPC1, is sufficient to inhibit the development of eye field cells from mESCs. GIPC1 interacts directly with IGFR and participates in Akt1 activation, and pharmacological inhibition of Akt1 phosphorylation mimics the dnGIPC1 phenotype. Our data, together with previous studies in Xenopus, support the hypothesis that the GIPC1-PI3K-Akt1 pathway plays a key role in eye field specification in vertebrates.

Check out the full article here!