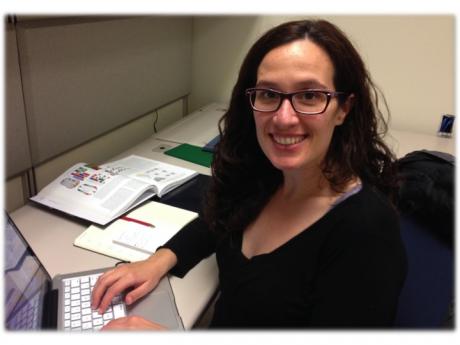 Anna La Torre grew up in Campdevanol, a small village quite close to the Pyrenees in Catalonia. She attended the University of Barcelona where she received a degree in Biology, and was introduced to the world of Developmental Neurobiology as an undergrad by virtue of Dr. Jesus M. Ureña’s generous mentoring at the Institute for Research in Biomedicine (IRB Barcelona). She joined the Neurobiology Ph.D. program at the University of Barcelona under the co-mentorship of Dr. Ureña and Dr. Eduardo Soriano. Throughout this period, she studied the role of several intracellular transduction pathways during neuronal migration and neuritic branching. In 2008, she moved to Seattle to work in the laboratory of Dr. Tom Reh where she investigated several aspects of retinal development, implemented protocols to differentiate embryonic stem cells and iPSCs, and learned how to smile at the rain. In November of 2014, she joined the Department of Cell Biology and Human Anatomy at UC Davis.

Anna began her scientific career solely driven by the curiosity to understand how organisms built themselves from a single cell. She spends a lot of her time thinking about how progenitor cells manage to differentiate into multiple cell types, and she is very interested in using in vitro models as platforms to understand basic principles of development and disease.

Anna loves photography, both microscopic and macroscopic. Especially when the subject of the picture is her son, Marc. In just a few years he probably won’t be so cooperative. She also enjoys books, theater, music, the mountains and traveling around the globe.

Send message
Back
This item appears in: