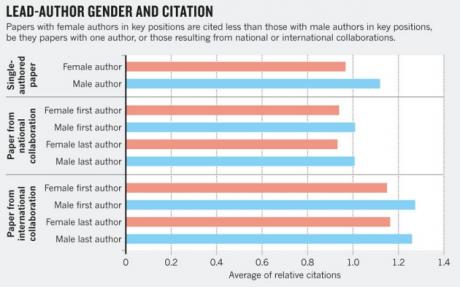 There is an interesting new paper in Nature of interest.  The paper is titled “Bibliometrics: Global gender disparities in science” and is by Vincent Larivière, Chaoqun Ni, Yves Gingras, Blaise Cronin & Cassidy R. Sugimoto.  In the paper the authors report a detailed analysis three parameters:

They then assigned gender to authors using multiple sources and examined the relationships between the 3 listed parameters and gender.  And the findings are pretty striking.

I note – it is worth going to the Nature web cite for this article because some of the figures are interactive and one can click on different fields and change the plots.

The authors state – before digging into the details of their analysis “In our view, the scale of this study provides much-needed empirical evidence of the inequality that is still all too pervasive in science. It should serve as a call to action for the development of higher education and science policy.”  A pretty strong statement that at least to me seems to be worth considering given their analysis.

The authors then discuss the implications of their findings and make some recommendations for future actions.  Among their conclusions (which I quote directly so as to not alter any implied meaning):

This paper is definitely worth looking at in detail.  And I note there is also a lot of supplemental material that might be worth downloading and playing around with.  Data is critical for understanding the gender disparities in science and for planning and then testing ways to correct such disparities.

This blog entry has been archived and may contain content that is out of date.
Blog entry
December 12, 2013 Jonathan Eisen