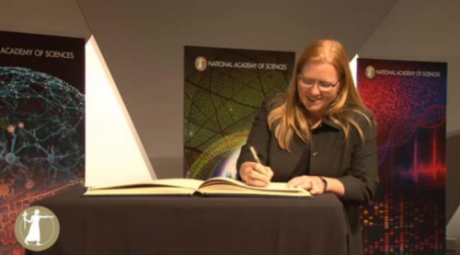 The College of Engineering at UC Davis will present a lecture by Kristi S. Anseth at 4 p.m. on Monday, May 5, in 1005 GBSF Auditorium, Genome Center, on the university campus. A distinguished professor and Tisone Professor in the Department of Chemical and Biological Engineering at the University of Colorado, Boulder, Anseth, will speak on “Materials to Study Cell Biology in the Fourth Dimension.” The event is presented as a College of Engineering Distinguished Lecture.

Inducted into the National Academy of Sciences on April 26, 2014, Anseth is also a member of the National Academy of Engineering and the Institute of Medicine, a rare scientist elected to three national academies.Considered by many to be the pioneer in the field of tissue engineering, Anseth is a designer of new biomaterials for applications in drug delivery and regenerative medicine. Her work blends polymer chemistry and physics, molecular and cellular biology, and molecular simulations and modeling, to solve problems in the fields of biomaterials and tissue engineering. One of her many research goals involves the development of hydrogel materials to help promote tissue regeneration. Her seminal work on the mechanisms of how extracellular cues are transmitted through cells, and her innovative approaches for biomolecule presentation, have revolutionized the field.

Anseth obtained her undergraduate degree in chemical engineering at Purdue University in 1992, and then earned her doctorate in 1994, also in chemical engineering, at the University of Colorado. She spent a year as a research fellow at MIT, before joining the faculty at the University of Colorado, Boulder (UCB), in August 1996. In 2000, she also became an associate professor of surgery at the University of Colorado Health Sciences Center, Denver, a position she holds to this day. That same year, she was named a Howard Hughes Medical Institute Assistant Investigator — the first engineer in the United States to be so honored — and she “graduated” to full investigator in 2005. She became associate faculty director of UCB’s Colorado Initiative in Molecular Biotechnology/BioFrontiers Institute in 2003, the same year she was named UCB’s Tisone Professor in Chemical and Biological Engineering.

Anseth has garnered an impressive roster of awards and accolades during a career that still can be regarded as unfolding. In 1999, she was named among MIT Technology Review’s 100 “Innovators Under 35.” In 2003, she was honored with the American Society for Engineering Education’s Curtis W. McGraw Award, which recognizes outstanding early achievements by young engineering researchers. The following year, she received the Alan T. Waterman Award, the National Science Foundation’s highest honor. Popular Science magazine named her one of its “Brilliant Ten” in 2008, and that same year the American Institute of Chemical Engineers cited her among its “100 Chemical Engineers of the Modern Era.” She was elected to the National Academy of Engineering in 2009, and the Institute of Medicine of the National Academies in 2010, becoming the youngest member ever elected to both institutions.

Anseth is equally dedicated to her teaching duties, and her devotion to classroom give-and-take has had much to do with her decision to remain in academia. She has received numerous teaching awards, including the 2008 Distinguished Engineering Alumni Award for Education, and UCB’s 2013 Hazel Barnes Prize, the university’s highest faculty recognition for teaching and research.