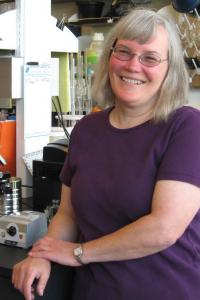 Dr. Bisson is a Professor Emeritus and Geneticist in the Agricultural Experiment Station in the Department of Viticulture and Enology in the College of Agricultural and Environmental Sciences. She leads the UC Davis ADVANCE Program as Faculty Director and provides daily project leadership and management in addition to serving as a co-chair to the Policy and Practices Committee of the ADVANCE program on the Davis campus. She served for several years on the CAP Oversight and Appellate Committees, chairing both.

Dr.Bisson’s main area of research is the investigation of utilization of carbon and energy sources in yeast, with a specific focus on how eukaryotic cells detect energy sources in their environment and prioritize use when presented with a mixture of substrates. She is using the yeast Saccharomyces cerevisiae as a model system in which to conduct these studies, because of the ease of genetic manipulation of this organism. Her research is important from a very fundamental perspective, in adding to our knowledge of the mechanisms of regulation of metabolism, but also has broad application in both enology and medicine. Work conducted in her laboratory has led to the identification of the first eukaryotic glucose sensor, the SNF3 gene, and to the discovery of a large multigene family of hexose transporters, the HXT (HeXose Transporter) genes of Saccharomyces. The analogous gene family in humans has been shown to play a role in the on-set of adult diabetes.

Dr. Bisson served as Department Chair from 1990-1995; her term saw the dedication of The Jacob Research Center at the Oakville Experimental Field Station. Her contributions to the advancement of knowledge of yeast biology in the natural grape juice environment were acknowledged by the award of Honorary Research Lecturer for the 50th Annual Meeting of the Society of Enology and Viticulture in 2000. Dr. Bisson held the Maynard A. Amerine Endowed Chair in Viticulture and Enology from 1997 to 2008. Dr. Bisson regularly teaches classes ranging from VEN 124, Wine Production and GGG201A, Advanced Genetic Analysis, to VEN 270, a course on reviewing a scientific manuscript for advanced graduate students. Dr. Bisson is the Science Editor for the American Journal of Enology and Viticulture. Dr. Bisson received the Excellence in Teaching Award from UC Davis Extension in 2002, the Excellence in Education Award from Associated Students of UCD in 2004 and the DEVO Excellence in Teaching Award in 2012. She was also the recipient of the prestigious James M. Craig Lectureship from Oregon State University in 2011. The textbook that she co-authored, “Principles and Practices of Winemaking” won Le Prix en Oenologie from the Office International de la Vigne et du Vin in 1998. Dr. Bisson has served a total of three years as the Chair of the Academic Senate of the Davis Division of the University of California.