NATURE Special Issue: Women in Science Why is science still institutionally sexist? A special issue of Nature confronts the debates 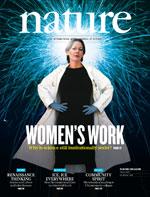 Despite some progress toward equity in access to STEM careers, women scientists are still paid less, promoted less frequently, win fewer grants and are more likely to leave research than similarly qualified men. The gender gaps are the subject of heated debates about the relative influence of individual gender differences, e.g., in science aptitude and motivation, and systemic influences, e.g., implicit bias, inflexible work schedules and the long road through graduate school, postdoctoral research positions the tenure track.

A new series of articles in the journal Nature tackles these issues, examining the causes of the science gender gap and highlighting solutions that work. The renewed attention to this issue highlights its urgency. “We are not drawing from our entire intellectual capital,” Hannah Valantine, the Stanford School of Medicine’s dean of leadership and diversity, told Nature, and she asserts “We’ve got to put on the accelerator to evoke social change.”