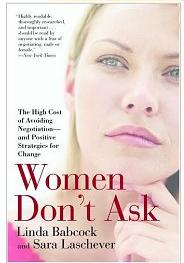 In their book, Women Don’t Ask: Negotiation and the Gender Divide, Linda Babcock and Lara Laschever look at the barriers holding women back and the social forces constraining them.They show how to women can reframe their interactions and more accurately evaluate their opportunities to more effectively negotiate for salary and other resources that are essential for career advancement.They show how to recognize the ways in which our institutions, child-rearing practices, and unspoken assumptions perpetuate inequalities – inequalities that are not only fundamentally unfair but also inefficient and economically unsound.

Women Suffer When They Don’t Negotiate

Women Have Lower Expectations and Lack Knowledge of their Worth