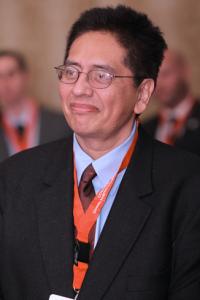 This research agenda has included a great number of topics including the role of cross-immunity on the evolution and dynamics of influenza, problems at the interface of homeland security and disease invasions (natural or deliberate), models for the spread of social “diseases” like alcoholism and of extreme ideologies and their impact on cultural norms. He has been appointed to the Santa Fe Institute’s external faculty (Santa Fe, New Mexico) and as adjunct professor in the BSCB department at Cornell University. Founding director of the Mathematical, Computational and Modeling Sciences Center and the graduate field in applied mathematics in the life and social sciences or AMLSS at ASU. Dr. Castillo-Chavez is also the Executive Director of the Mathematical and Theoretical Biology Institute (MTBI) and The Institute for Strengthening the Understanding of Mathematics and Science (SUMS). Castillo-Chavez’ undergraduate/graduate research program (established in 1996) was recognized as a “Mathematics Program that Makes a Difference” by the American Mathematical Society in 2007 and by the 2011 Presidential Award for Excellence in Science, Mathematics, and Engineering Mentoring. SUMS’ efforts were recognized with a Presidential Mentorship Award in 2002. He received a Ph.D. from the University of Wisconsin.