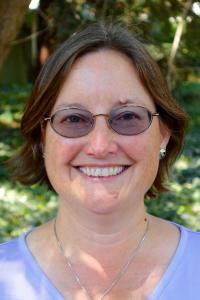 Louise Kellogg is Professor of Earth and Planetary Sciences and Director of the KeckCAVES at UC Davis.  KeckCAVES is a unique visualization collaboration that is developing software to interact with three-dimensional data in real-time – moving, rotating, coloring, and manipulating datasets with an ease and speed unobtainable even in other 3D CAVE environments. Dr. Kellogg’s research focuses on how the flow in the Earth’s mantle that drives plate tectonics, and observing and interpreting deformations in the Earth’s crust.

Within these broad categories are a variety of projects including mantle convection, earthquake physics and crustal deformation, and visualization of geoscience data in an immersive environment. She has received an NSF Presidential Faculty Fellow Award (1992), is a Fellow of the American Geophysical Union (2010), received the Chancellor’s Award for Diversity and Community (2005),  and was co-holder of the UC Presidential Chair for Undergraduate Education (2006-2009). Dr. Kellogg holds a doctorate from Cornell University (1988).