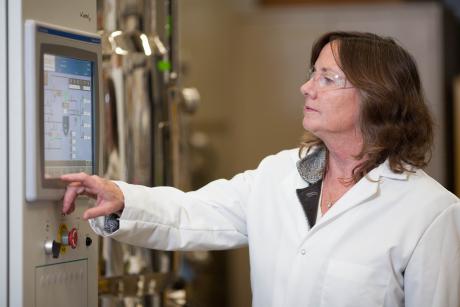 Developed by Mapp Biopharmaceutical Inc. of San Diego, in collaboration with the U.S. government and partners in Canada, Zmapp is a cocktail of antibodies produced in and extracted from whole tobacco plants. The UC Davis team, including plant scientists, molecular biologists and chemical engineers, will attempt to produce the antibodies from plant cells grown in bioreactors instead of in whole plants.

Extracting the drug from whole plants is a proven process but production capacity is limited at this time, said Karen McDonald, professor of chemical engineering and materials science.

“Whereas if we can produce it in a bioreactor, a lot of biotech companies and contract manufacturers can do that, and it would allow for much more rapid production,” McDonald said.

The UC Davis team will use the same type of bacteria to infect plant cells, then attempt to grow them in the laboratory, starting with volumes of a few liters and scaling up to a 100-liter bioreactor. Biotech companies use similar methods to produce drugs and vaccines from cultures of animal cells, bacteria and yeast.

“This is about proof of concept,” said Somen Nandi, managing director of the Global HealthShare Initiative at UC Davis, which aims to speed development of low-cost health-care solutions for developing countries, including a rabies vaccine grown in tobacco plants. If successful, the technique could potentially be applied to other antibodies used as drugs or vaccines.

UC Davis is a global community of individuals united to better humanity and our natural world while seeking solutions to some of our most pressing challenges. Located near the California state capital, UC Davis has more than 34,000 students, and the full-time equivalent of 4,100 faculty and other academics and 17,400 staff. The campus has an annual research budget of over $750 million, a comprehensive health system and about two dozen specialized research centers. The university offers interdisciplinary graduate study and 99 undergraduate majors in four colleges and six professional schools.